This all took place on February 25.   Grassy Ridge Bald shares the same trail head as Roan High Knob.  Getting to the Grassy Ridge Bald trail head is a two hour drive from my house to Carvers Gap.  I left my house at 6:45 AM and went to the old law office of Scott, in Asheville (about halfway) to meet and carpool up to Carvers Gap.   We arrived at Carvers Gap about 9 AM.  We got out of the car and the wind was a steady 25mph or so with higher gusts.   We took a look at Grassy Ridge Bald.  The trail is out in the open.   It is appropriately named “grassy ridge” as there are few trees to provide any wind break.   We started up the trail.    A gust of wind almost knocked us down.    I was already wearing a balaclava and the wind penetrating it was very cold.   It was in the thirties without the wind chill.  We paused.   Scott then told me, and I am paraphrasing, “We can’t do this. Let’s go up Roan High Knob instead.  There we will be sheltered by the trees”.  I agreed and went back to the trail head for Roan High Knob just 50 meters away. 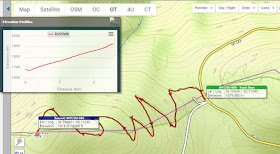 So, the so called “triple” has now become a “double”.   We rationalized, we will have another go at Grassy Ridge Bald during the spring campout.   We looked for blazes signifying we are on the correct trail.  Finding none, we relied on the GPS and our instincts that we are in the right direction.   Eventually, our trail met with the main trail, the Appalachian Trail (AT for short which - stretches from Georgia to Maine).  Water flowing down the mountain formed as ice on the trail, as the trail itself channels the flow down.   Some stretches were downright treacherous requiring us either to straddle walk or walk along the sides above the ice.   We did a lot of the latter.  I slipped on the ice on one of the stretches, no injury sustained.   Scott, almost fell on another stretch.   Good boots with good ankle support are a must.  We were walking from rock to rock above the ice – had to be careful the rock surface was not glazed.   Hikers with their dogs caught up to us.   They were thru hiking from Carvers Gap to a parking area about 6 miles away.   One of the hikers was a “ham” (short for radio amateur) and his name is David.  His call sign is KF4DKW and he is the Emergency Coordinator (EC) for the area.   Some radio amateurs belong in organizations that respond to emergencies during natural disasters.   David belongs to one of those.

The hiking group went off trail to a shelter near the summit.   We proceeded on our trail on the AT and found the trail descending.   Scott paused.   This is not right, we should be going up.   The summit coordinates on the GPS is supposed to be 100 meters away pointing to our left and not along the trail line.   We concluded, the AT does not cross the summit.   We hiked back to where the other hikers entered a trail to the shelter and joined them there.  We were supposed to be at 1917m ASL at the summit and we were at 1910m at the shelter.  Clearly we were in the Activation Zone or the AZ.  We met the other hikers at the shelter and took photos of each other at the shelter.   Scott proceeded to walk another 50m or so away from where I was to set up his radio station.    I set up near the shelter.   The wind was still gusting around us but the trees provided a good wind break.  Still we could feel the chill.   My feedline was too short to allow me to operate in the shelter.  I picked a sunny spot to set up my 1 pound camp chair.   There was no cell service.  We could not send a spot to the SOTA spotting network thru the internet alerting our chasers that we were ready to make contact.   Being about noon, I went on the 20m band and started calling CQ.   The frequency that was published on the alert I had published earlier in the day was occupied by a couple of hams having a long conversation.   So I parked myself a few kilohertz below them at 14063 thinking that one may look for me there.  After calling CQ for about 10 minutes, a Canadian ham VE1WT called me.  We exchanged pleasantries and signal reports.

I politely asked him (in Morse) to spot me in the cluster.  I am not sure where he spotted, but I started getting calls.   Next was Jorge, EA2LU, a frequent chaser from Spain.  He came in really loud.   I knew he was a chaser, so I asked him to spot me on the SOTA cluster.   My mind must have had brain freeze.   My mind was still fixated that our first summit was Grassy Ridge Bald – and I gave him the wrong summit reference to post, W4C/EM-005.   We were actually in W4T/SU-005.   A wrong summit reference we can fix later.   We can always email our callers to correct their logs.   The callers kept coming and after about 10 minutes I had a dozen.  They were all familiar chaser calls except for the one from England.   This was a first for me to be chased by someone from the UK.  It was G4OBK, Philip Catterall.   I read in his QRZ.com page bio that he is in the ARRL Honor Roll (as one who has made contact with all 340 current DXCC entities) and the first SOTA activator to summit all 176 summits in the British Isles and to chase the same 176 summits from his home station.   It took him 10 years to do it.   He was HF contest champion in England for 5 years but most of his activity now is dedicated to SOTA.   Philip is #3 in the all-time activator score with over 3000 points from the G (England) Association.  I am sorry for digressing and now back to our Roan Knob experience.  Scott walked over to me.   His voice sounding desperate.  “Did you get any calls?” he asks.   I said “Yeah, I have about a dozen and I even have one from the UK”.   He asks, “Can I jump on your frequency, and make calls from there?  I only have one call and it is from David KF4DKW on 2m FM.   I have been calling CQ on 30m for 30 minutes without a single call”.   I said “Sure, let me tell my callers, to listen for you”.   I then got on the paddle and said in Morse “QRX, QRX, KW4JM WILL BE CALLING CQ NEXT PSE CALL HIM”.    As soon as I finished sending that message in Morse, I heard Scott, very loudly calling CQ, and started making contacts.   I got up, walked to the sunlit areas seeking warmth.   My fingers were numb despite gloves.  I then walked inside the shelter, thinking it would be warmer there.  No, it was better in the sunshine.   I removed my gloves and put them in my pants pocket hoping the body heat will thaw it.  All this time I can hear Scott making contacts even from 25 meters away as I was desperately trying to get warm.    I then later saw Scott walking to me saying “I am done! Let us get the hell off this mountain”.    Those were the very words I wanted to hear.  Without hesitation, inside of 5 minutes, I was packed and ready to go down that ice covered trail.  We reached the comfort of my truck in about 3 hours and 42 minutes from when we set out at the beginning.   We actually were on a good hiking pace of about 35 minutes a mile, despite all the ice.  We hiked 4.17 miles, and climbed 784 feet of vertical.   I record all my GPS tracks and upload it to a site called STRAVA so I can later study the hike statistics. 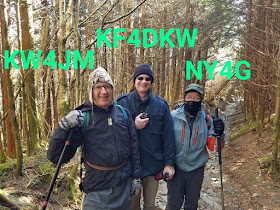 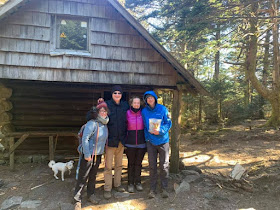 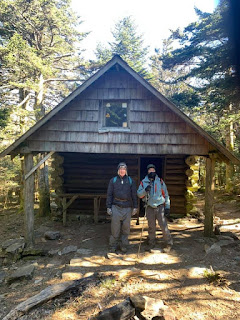 We sat in the truck contemplating our next move.   I said “So I guess we are not doing Grassy Ridge Bald today”.  Scott answered, “You could not pay me money to go up Grassy Ridge Bald under these conditions”.   I jokingly said “If I gave you a million dollars, would you go up Grassy Ridge Bald?”   Scott replied “For a million dollars, maybe I will do it, but I would not do it for a half million”.
Since Locust Bald is next, we proceeded down the road towards Locust Knob.   Fortunately, Scott had written down directions, since there was no cell service to activate Google Maps on the cell phone.  Locust Knob is a “drive-up”, a summit where one can drive all the way or very close to the summit.  It is invariably through a windy and steep road, with many switchbacks, often dirt or gravel covered, almost always narrow, and during rain, very treacherous.  We were lost for a while searching for the right roads, when all of a sudden, cell service came back and Google maps directed us to Bernie Lane, in Bakersfield NC.   We proceeded up the windy forest road and about 150 meters away from the summit, we saw two big posts with prominently placed purple paint and no-trespassing signs on it.  We hesitated and stopped for 20 minutes.  We texted Dean Blair K2JB who has activated Locust Knob before and asked if he has seen these no trespassing signs.  Dean had not seen this before, but had a more liberal interpretation of the “no trespassing signage” and still thought the summit was fair game.  We conversed that we still had Phillips Knob, another 6 pointer, as a backup and it was still early.  So we abandoned Locust Knob and proceeded to Philips Knob, which was not very far.

By the time we summited Philips Knob, another drive-up, the weather had changed to the mid-forties at the summit with calm winds.   The summit had wonderful views from the fire tower.  Celo Knob was very prominent on the southern horizon.  We set up our stations quickly and before too long, we were able to “sweep the bands” and make contacts with our chasers.   I was fortunate enough to make two summit-to-summit contacts with an activator in the Colorado Front Range on the summit of W0C/FR-064.   It was George KX0R.  He was very faint about a 1 or 2 on the signal strength on the 40 meter band but intelligible.   I asked him for his summit reference repeatedly just to be sure I had it right.    He called me again on a different band, 30m, and he was louder there perhaps a 4 or 5 on the strength scale.   I asked him if we was still on FR-064 and he answered yes.   Gary and Martha Auchard (W0MNA and W0ERI) from Kansas, are amongst our most loyal chasers, called us, as did Dean Blair K2JB, our friend. Amongst those who called me are also Paula, K9IR, from Illinois, Karen K4KRN from Tennessee, and “Super Sloth” Bruce W2SE.   (Super Sloth is a designation given to a chaser with 10000 chase points).

On the trip down, we conversed about the salvage operation we did that day, abandoning both Grassy Ridge Bald and Locust Knob, which were on the original plan.   Thanks to Scott’s and Dean’s knowledge of the surrounding area, we still had a “Plan B” to resort to.  Scott and I drove down to Asheville where his wife Jeannette was patiently waiting to take Scott home.   The first words out of Scott’s mouth as he met his wife was “It was c-o-o-o-l-d and I am glad it is over!!.”