I really like the TS830S and it is one of my favorite radios. Somehow I lost drive on the band. I took it to Ron Crisp WB4VZN in Union SC for him to look at it. Ron has developed a reputation for being the "radio whisperer" when it comes to Kenwoods and he did not disappoint. He put it on the scope and with a few screwdriver turns, he put the 40 meter band back to life on transmit. It gets a full 100W power out still. Thanks Ron for all the help.
Posted by Ariel Jacala at 10:11 AM No comments:

Images from the Sun Including August 1, 2010 CME

Posted by Ariel Jacala at 9:25 AM No comments:

Posted by Ariel Jacala at 9:13 PM No comments:

SUNSET PLANET SHOW: When the sun goes down tonight, step outside and look west. Venus, Mars, Saturn and the crescent Moon are having a lovely 4-way conjunction. It's a great way to warm up for the Perseid meteor shower, which peaks on Thursday night, August 12th. Get the full story from Science@NASA. Sky maps: August 12, 13.

PERSEID METEOR SHOWER: The annual Perseid meteor shower is underway. According to the International Meteor Organization, dark-sky observers are now counting more than 35 Perseids per hour, including many fireballs. Be alert for Perseids from 10 pm on Thursday, Aug. 12th, until sunrise on Friday, Aug. 13th. The darkest hours before dawn are usually best.

Posted by Ariel Jacala at 3:11 AM No comments: 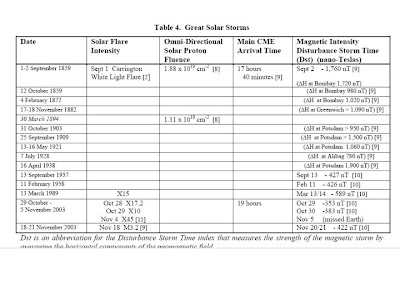 Posted by Ariel Jacala at 6:03 PM No comments:

The following geomagnetic storms damaged the electrical power grid (summarized by James Marusek from a paper published in 2007 (http://www.leif.org/EOS/SSTA.pdf):

August 2, 1972 – A solar storm caused a 230,000 volt transformer located at the British Columbia Hydro and Power Authority to explode

April 13, 1981 – A replacement 735 kV transformer at St. James Bay, Canada also failed the next year during another geomagnetic storm.

March 13, 1989 – At 02:45 EST on March 13, geomagnetically induced currents (GIC) inundated the transformers of the Hydro-Quebec power system and overloaded them with current. The voltage fluctuations that resulted prompted the tripping, or deactivation, of reactive power compensators at the Chibougamau, la Verendrye, Nemiscau and Albanel substations. A severe voltage drop resulted; the power lines from James Bay malfunctioned and the system collapsed. It was later determined that the power lines were substantially vulnerable due to their great length and the number of static compensators that ran along their distance. The Hydro Quebec outage resulted from the linked malfunction of more than 15 discrete
protective-system operations. From the initial event to complete blackout, only one-and-a-half minutes elapsed—hardly enough time to assess what was occurring, let alone to intervene.15 The blackout resulted in the loss of 21,500 megawatts of electricity generation. It took nine hours to restore 83% of that electrical load. The blackout affected 6 million people. The physical damage included a 1,200-ton capacitor failure at a Static VAR Compensator (SVC), overvoltage damage to two step-up transformers at the La Grande 4 generating station, surge arresters at the La Grande 2 and Churchill Falls generating stations, and to a shunt Figure 2. Earth ground resistivity based on underlying rock strata. Conductivity measurements from the Geomagnetic
Laboratory of the Geological Survey of Canada in Ottawa with Extension to the United States Completed by Electric Power Research Institute – Sunburst Project. Units – siemens per meter.
(regions in red are very non-conductive). reactor at the Nemiscau substation, and damage to the SVCs themselves.

March 13, 1989 – The solar storm destroyed a $12 million generator step-up transformer owned by the Public Service Electric and Gas Company of New Jersey. The transformer was a linchpin in converting electricity from the Salem Nuclear Generating Plant. The 288.8/24-kV single-phase shell-form transformers, which are rated at 406 MVA, are connected grounded-wye. The damage to the transformers included damage to the low-voltage windings, overheating, thermal degradation of the insulation of all three phases, and conductor melting.12 The utility asked the supplier for a replacement and was told thatthe order would receive top priority, but it would still take almost two years to fill. Fortunately a spare transformer was made available, but it still took 6 weeks to install.

October 30, 2003 – A power grid in southern Sweden located in Malmo experienced a 20-50 minute electrical blackout affecting 50,000 customers due to a strong solar storm. The same storm caused significant transformer damage in South Africa. Over 15 transformers in South Africa were damaged, some beyond repair.
Posted by Ariel Jacala at 5:22 PM No comments: 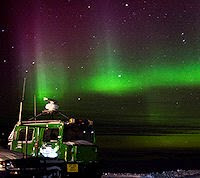 SOLAR BLAST JUST MISSES EARTH: On Saturday, August 7th, magnetic fields around sunspot 1093 erupted. NASA spacecraft and many amateur astronomers photographed the blast, which produced a strong M1-class solar flare and hurled a coronal mass ejection (CME) into space--apparently just missing the sun-Earth line. The explosion also made whooshing sounds in the loudspeakers of some shortwave radios. Visit http://spaceweather.com for audio recordings and movies of this latest solar event.

AURORA RECAP: Last week's geomagnetic storm sparked Northern Lights as far south as Iowa in the United States, and some nice Southern Lights over Antarctica. See photo above
Posted by Ariel Jacala at 5:51 AM No comments: