I usually keep a browser window on a DX Cluster site which I check once in a while for workable DX.  I saw EL2DT spotted once in the morning on 20m CW but quickly went away.  Late afternoon, I saw him again spotted and this time more stations are spotting him, not just the automated skimmers.  Within about 2 minutes I was logged into my home station turning the VFO to to his TX frequency.  And there he was - loud and clear as a bell working station after station simplex.  I swing the yagi to 95 degrees by clicking on the icon on my computer and saw the indicator swing around to bearing 95.   He is even louder now working split up 1.  The transmitter is set at 5 watts.  I send my call twice.  He responds immediately.  Here is a photo of Dickson Tarnue - EL2DT. 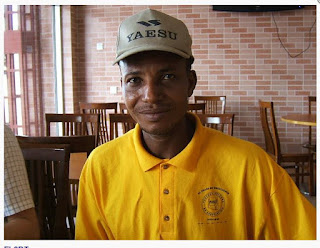 Posted by Ariel Jacala at 4:21 PM No comments: 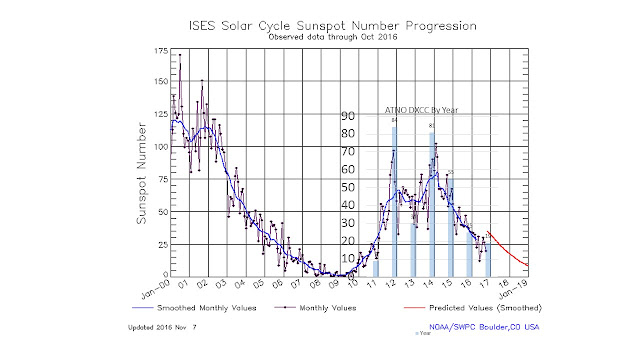 It is interesting how the double peaks of Cycle 24 coincide with the double peaks of the ATNO DXCC I worked for the corresponding year.    Considering how modest my station is in terms of antenna systems and power levels, I have done well.  But I am afraid that my station capability combined with my skills have reached entitlement.   With the propagation of Cycle 24 - 300 DXCC is probably all that this station is entitled to max out at.   Any antenna upgrades I can do is limited because of my HOA situation and limited land.  This same station in Cycle 23 however could have probably reached Honor Roll - all things being equal.  In Cycle 23, propagation makes up for a lot of station shortcomings.  How I may have done in Cycle 23 speculative, and a fruitless one at that since I cannot turn back time and enter the amateur ranks 15 years earlier.  In the mean time - I will try the few ATNOs I can still muster from this station and perhaps reach 305.  Chasing DXCC can still be a lot of fun through the DX Marathon as stations are on a more level playing field (various classes of power and antennas), dealing with the same propagation we are all dealt with.  Everybody gets a fresh start as the clock turns over at the first of the year.
Posted by Ariel Jacala at 5:02 PM No comments:

Thanks to all the following stations who decided to dig me out of the noise floor during the CQ WW DX Contest:

Here is a photo of remote TS480 up in my loft.  True that the separation is perhaps 70 feet or so from my basement shack.  Everything has to work in the local network before  I proceed to remote it to many many miles away. 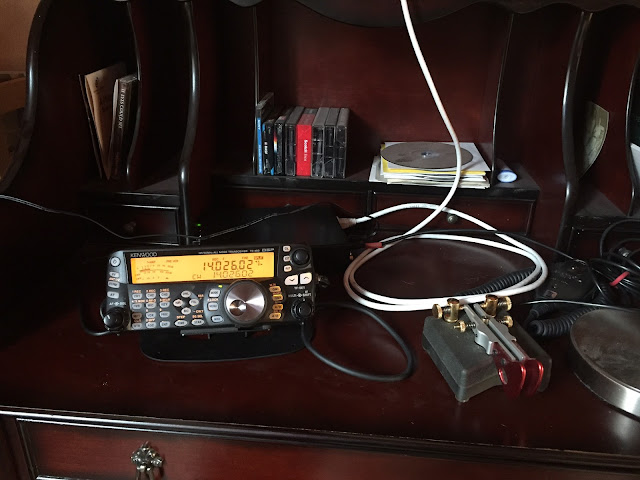 I had to dedicated most of the afternoon trying work out all the bugs:

(1) No connection - I had the wrong address in the SIP contact.   The ethernet port was flashing yellow indicating it was waiting for a connection

(2) Light on the ethernet port is solid yellow now.  I should be connected.   Radio won't turn on.   Well the RJ12 jumper I made was wired backwards.   I inadvertently wired the jumper correctly but it took several trials and errors to correctly identify it was the jumpers fault.

(3) It seems to be keying but no RF seems to get out.  I tried calling some Mediterranean stations that I should be able to work with 5 watts - no success.  I turned upo the wick to 80 watts.   The output meter indicated power and low SWR - what gives?  Well the keyer output from the Radio side RRC has to be connected to the Keyer input - straight key with a stereo plug - duh.  The Radio RRC gets its input from the built in Keyer in the Control RRC.  I now had to prove to myself that everything is working.

(4) Now comes the harder part, moving the control station 25 miles away to my parents house.  First I set up the router to see the RRC as a DMZ such that all traffic in and out will not be blocked by the firewall.   While I was at it, I put port forwarding to port 17152 for N4PY to work as a client-server.

Now - it is time to drive to Simpsonville armed with a Wifi router extender and the remote head, RRC control box, etc.
Posted by Ariel Jacala at 1:45 PM No comments:

On Friday (Day 323) - while logged in remotely - bagged 5N/PA3TG on 20m CW.  The Nigerian station was pretty strong into the east coast.  He was slow but very deliberate with very good ears.

On Saturday (Day 324) - added Sardinia IS0HQJ.  I did not need Central African Republic but I worked Ken TL8AO on 20m as he was coming in strong from Africa.   It took a few tries to narrow down his QSX frequency to get into his log.   This is at least a new band and QRP to boot.

On Tuesday (Day 327) added Tanzania 5H1WW on 15m CW.   Propagation was just starting to set in from Africa early in the day.   Propagation on 40m became really long during the evening hours as I was able to add Asiatic Turkey TA3/LZ3ND, Suriname PZ5V and as a bonus I was able to work VO2NS (Nazair) - Zone 2 - long missing on 40m to fill in that needed band zone combination for 5 Band Worked All Zones.


Posted by Ariel Jacala at 3:56 PM No comments:

Only 268 CW QSOs made to North America out of 6119 and the openings to the east coast were primarily on 17m.  I was not lucky enough to get a 17m QSO.   Any openngs to NA east coast were very weak.
Posted by Ariel Jacala at 5:26 AM No comments:

The Trials and Tribulations of Setting Up a Remote Station

I was finally able to set-up a client-server arrangement for N4PY such that the N4PY control software is operating at the control end computer rather than the remote desktop option of taking over a remote computer on the internet.  The problem with remote desktop is latency - perhaps 25 to 50 milliseconds.  It may not seem like a lot but the shorter the latency the better.  I was able to test all the functionality from within the network:

(1) Functionality of the Griffin Powermate Knob on the client (control) computer
(2) Functionality and speed tests on tuning the VFO and sending CW over the network.

Now I was  eager to exercise this option from outside the LAN.  I fired up the LogmeIn client and found that the remote desktop is offline.   What happened?  Did the computer sleep?  The only way to find out is to go home.  Now to figure out a way to wake the computer from the internet - a concept called Wake on LAN (Local Area Network).

Upon returning home - the computer was in sleep mode.  I set up Windows device manager to wake the computer up via the Local Network or LAN - we will see how that works

In the video below I demo using the Griffin Powermate as a tuning knob.  The small Microsoft Surface tablet is the Client computer on the control end.  There is no need for a remote desktop connection. There is a need still for audio voice over IP (VOIP) through Skype.


Posted by Ariel Jacala at 9:59 AM No comments: 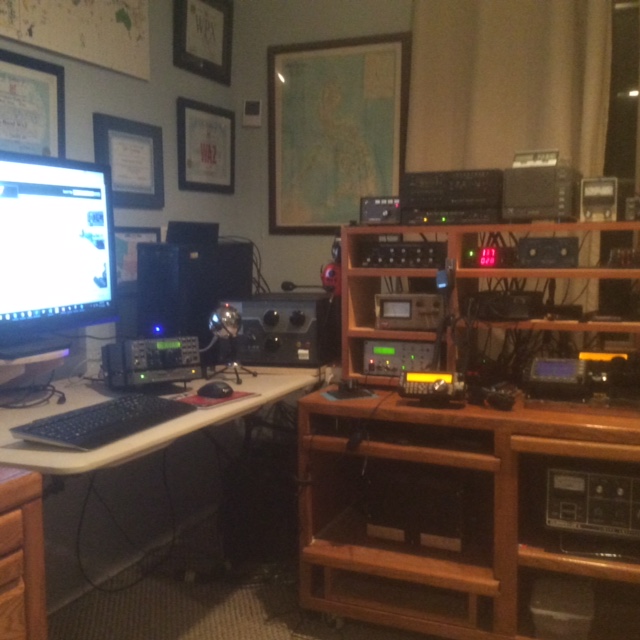 Here it is crammed to a small space.  The newest addition to the stable is a Kenwood TS480SAT with the control head near the StationPro2.   This is the rig I plan to remote using Remoterig by Mikrobit for Christmas.   Right now I can perform remote operation using "remote desktop" software LogMeIn or TeamViewer which is limited to CW only on the K2.   I can control power from 100 milliwatts to 500 watts using the K2.  I use N4PY as the control software for the K2.   I don't have an amplifier keying cable for the Kenwood TS480 yet and the serial cable to enable CAT operation is on order.  I will use Kenwood's ARCP-480 software for the TS480.  For the KX3, I plan on using Win4K3.   Turning it on is is a bit of chore and I plan to do it with some trepidation since I will apply 12V into Ring 1 (PTT) of the Mic plug using a Canakits USB operated relay.   I was assured by Elecraft that this will work.  I have to be certain I don't apply 12V to the tip of the Mic plug.  The computer chores are done by a CDO tower with 2 serial ports and 8 USB ports.   All the USB ports are used up in some sort of fashion

This was my first successful ragchew with a DX station on 15m CW while remote into my station through the internet.  It was one I needed for DX Marathon.  Having to deal with the latency on the internet while typing on the keyboard was sort of strange but worked nonetheless.  The Op on the other side was Alain.   Thanks Alain for a new one for DX Marathon.
Posted by Ariel Jacala at 8:22 AM No comments:

This was a nice surprise.  At 9417 miles away, he was surprisingly loud - peaking at S7 on my meter.  His name was Barry and liked to ragchew.  He was much stronger long path and that was the S7.   Long path distance was 15438 miles.   Double bonus in that he was also a new zone.  This was not too shabby for QRP.
Posted by Ariel Jacala at 1:50 PM No comments: