I thought I had written about this once before but I looked into my archives and found nothing.  I did do tests previously on 44 feet of wire for my EARCHI Matchbox and I thought I would revisit what the optimum length is for a random wire.

The random wire antenna is probably one of the least expensive, easiest and cheapest HF antennas to use if you have a tuner and you want to get the "most" out of a length of "random" wire without having to pull out that calculator, doing the math, getting the center insulator built or bought, running the feed-line, and all the rest that goes with putting up a more elaborate antenna.

However, there are lengths to avoid because if you pick that wrong  length, the tuner may not work in one or more bands

Jack, VE3EED, solved the major headache of doing all the math of figuring out what the multiple of half wavelengths of the ham bands are.  These are the lengths to avoid.

So in a nutshell - Here are the lengths to use which form a sweet spot for tuning all the ham bands.  All the numbers are in feet.  Make a note of it.

Well does it work?  Before I settled on 41 ft, I used 50 feet which is also OK but I found that with 50 feet 80m is difficult to tune.  41 feet is much better.  I did give up the tunability of 30m but the tuner in the KXPA100 does not have a problem.  All the other bands are a cinch and 12m is almost resonant.  All the SWR figures will change with length of feedline so don't worry about it and let the tuner do the work.

Contacts made with the end fed random wire using the EARCHI matchbox  are all with 50 watts and the KX3/KXPA100 are G0ORH, KR5N, MI0AHH, EA6NB, EA8/DL2DXA  CO8LY on the WARC bands during the tests I conducted today.  This will serve as my backup antenna for the DXpedition to Saint Pierre.  It can be deployed as a dipole or an inverted L vertical.
Posted by Ariel Jacala at 1:53 PM No comments:

(2) Make sure you research the QRN and man-made noise sources are minimal in the places you need to operate from.

(3) Take advantage of verticals near the ocean


(4) Don’t take on the role of a solo DXpeditioner unless you have several field day and extensive contesting experience, operating split, and operating long hours in the saddle.


(6) Know how to operate your rigs and antennas efficiently


(7) For making audio and video recordings

Posted by Ariel Jacala at 1:15 PM No comments:

Plan B - Power Source for the DXpedition

I have researched the airline regulations concerning small generators in checked luggage.  Generators have never been small enough to be packed into a a piece of luggage.  With the PowerHouse 500 Wi, it is small enough to be packed into a suitcase.  The question is, will it be accepted by the air carriers?  Some carriers will accept it as checked luggage provided it has never been run and never filled with fuel.  Some carriers will not allow it in any condition.  This forced me to rethink my power source for the time I am away from commercial power.

Plan B is to use Lithium Iron Phosphate batteries.  They have 1/5 the weight of the equivalent capacity SLA (sealed lead acid) and have a deeper discharge (80%) before needing a recharge.  The KX3 will stop working long before the battery reaches a deep discharge.  I just need a charger now that will work with 220V and 50 Hz commercial power.  I will also need to sell the generator I acquired.

It would be a good idea for us to take a similar tour and do a video/slideshow documentary operating from various places around the island near the ocean.  We will have a rig and portable antennas to make this possible now.  We can put that into our planning.

My one vote is to visit Avonlea, site of the movie Ann of Green Gables.  This movie was shot entirely in Prince Edward Island.

Anne of Green Gables is a 1985 Canadian television drama film based on the novel of the same name by Canadian author Lucy Maud Montgomery. The film starred Megan Follows and was produced and directed by Kevin Sullivan for the Canadian Broadcasting Corporation. It was released theatrically in Iran, Israel, Europe, and Japan.

The film aired on CBC Television as a two-part miniseries on December 1, 1985. Both parts of the film were among the highest-rated programs of any genre ever to air on a Canadian television network. On February 17, 1986, the film aired on PBS in the United States on the series WonderWorks.

If you ever have the chance, try to watch the movie - a great family movie.

Testing Antennas for the DXpedition 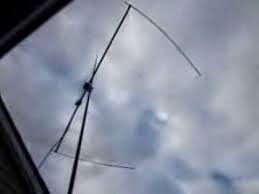 Wow.  This antenna is super easy to put up and tune.  Got the SWR at 1.2 at first try.  Moved the radiator an inch to tune it down to 1.0.  The radial is super easy to set-up.  I already used my NY4G call.  I used my ex call AJ4YM to see if 7QAA will come back. (Side Note - NY4G is so much easier to key up than AJ4YM) .Two calls at 200 watts and no problem.  Again, the CrankIR was only down 1/2 an S unit on receive.  The CrankIR was half an S unit higher noise floor.

The video below was only a receive comparison

Here are images  of the CrankIR 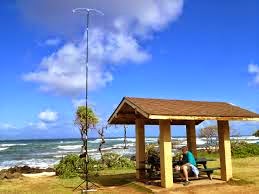 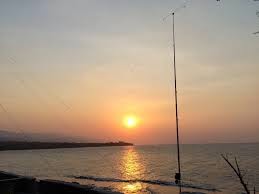 Posted by Ariel Jacala at 2:50 PM No comments:

March 16:  I was able to get more support.  Supporters  now include the following:


March 9:   I made a presentation at the Greer Amateur Radio Club and made an appeal for support.  Thanks to Tom Rouse's and Bernice's generosity, I am a little bit closer to my goal.  Dave Anderson was looking to loan me a backup rig.

Anyone wishing to contribute may do so in the following link:

The SteppIR antenna came in via UPS.

I was able to order the pelican case for the main rig.

This coming weekend I will be conducting tests on my equipment especially the 450 watt generator - to make sure it runs.

Informational Presentation at the following link:


Posted by Ariel Jacala at 5:26 PM No comments:

The long awaited time has arrived.  It seems like a marathon and feeling like I crossed a tape across a finish line.  It really is more of a milestone.  It is ironic and apropos at the same time that I got all three - 5 band DXCC plaque arriving, and Challenge, plus 30m DXCC all on the 5th year anniversary week of my first ever QSOs on HF.
Posted by Ariel Jacala at 4:33 PM No comments: 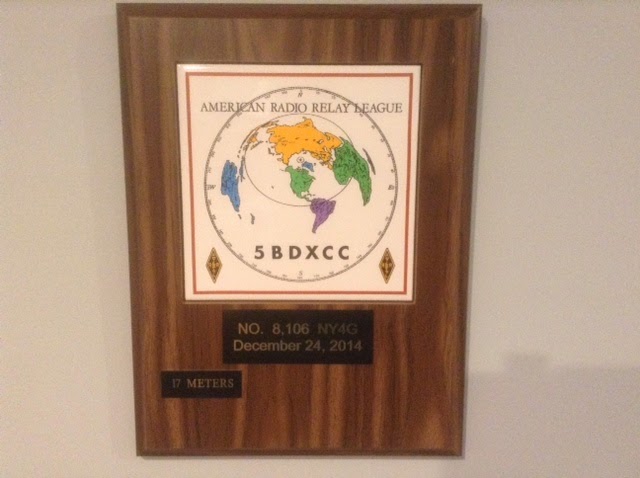 My first HF QSO is to maritime mobile station on March 2, 2010.  My second HF QSO and first land based HF station is a lighthouse on Moose Island in Maine AA1KS, the same day.  This week is my 5th year anniversary from my first ever HF contact (almost to the day).  This month is my 5th year after having the General Class upgrade.
Posted by Ariel Jacala at 6:32 PM No comments: