Well the first evening was a bust as I spent most of the evening in the ER as a family member got taken there.  No it was not me this time.  I did manage to work K7CA in Nevada but I did not log it as I got the phone call to go to the ER.  I may have to search for NV again tonight

The states that I need to complete WAS are NV, WA, NE, MT, AK - just five more.  AK is sure to get a pileup

I did get K7CA a second time for a good QSO, but he was not in Nevada but in UT working a contest station he built.

I also got into Luxembourg LX7I
I also worked England G3LET
Posted by Ariel Jacala at 9:32 AM No comments: 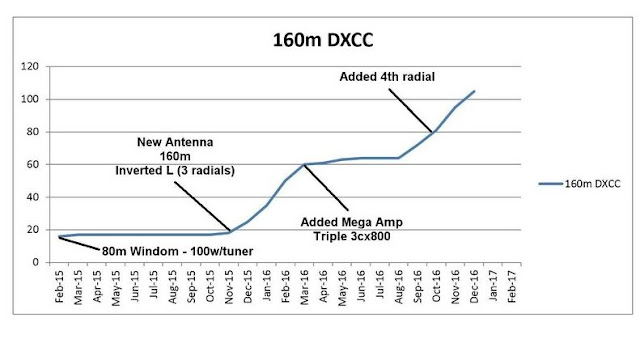 I too, have a small lot.  My run on 160m started in 2014.  I installed an inverted L with 4 elevated radials and worked the 160m contests that winter.  After that winter I concentrated on getting to 300 DXCC and DX Marathon QRP and took a hiatus on 160m.  I took down the 160m inverted L and put up a 30m delta loop.

As one can see my 160m had a very pronounced lull from the chart below:


The run ended abruptly in the Spring of 2015.  I felt I needed more power and a better antenna.  More power came in the form of an old Clipperton L that will do KW on 160m.   I had put in a brand new set of  high voltage capacitors in the power supply.  I tested it and found that it will push 1000W with 100W of drive.  (See my post in May 2016).  I really have not had to push power past about 750W and for the most part gotten away with mostly using the KPA500 since I still had the "old reliable".  In January of 2017 I had put up a folded counterpoise (FCP) design espoused by K2AV and W0UCE (SK).  It only has a 66 foot folded counterpoise from 174 feet of solid copper wire which takes up very little space. It requires a specially designed isolation transformer.  There are many articles on this design on the net. 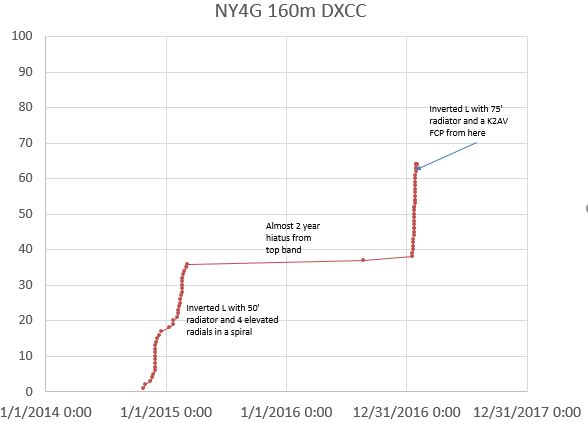 I did have a good run for a few days in January but it still remains to be seen whether I can keep up this pace.   I already see that it will likely slow down.  Below is a picture of the installation of the FCP Inverted L.   The radiator is 150 feet long and I nailed the SWR without pruning.   It is reasonably  flat from 1800-1835 with SWR < 2 and then I have to add inductance above 1835.  I could remove a few inches and center the dip in the SWR to about 1.825 but fooling with the set-up might do more harm than good since the proximity of the horizontal radiator to ground might change the capacitive coupling.  I think I will leave well enough alone.  Not a big chore adding inductance through the tuner. 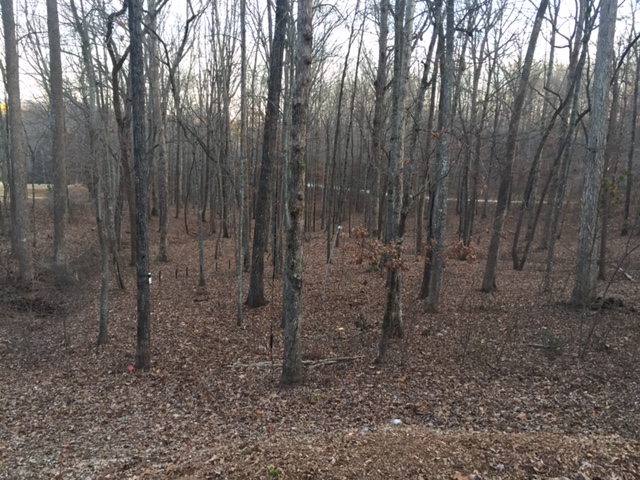 Here is the SWR Curve 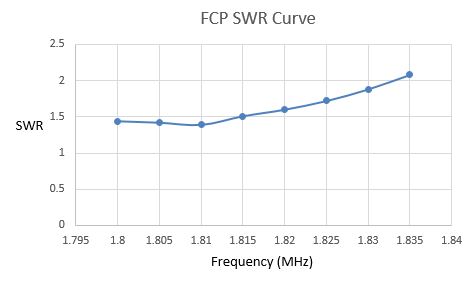 In terms of how it plays - the stateside stations in the CQ WW 160m Contest are loud and the noise floor is about S3 during the contest.  The K9AY is down in noise about 12 dB or 2 S units.
Posted by Ariel Jacala at 4:45 PM No comments:

There - I wrote it down to hold myself accountable for it.  The inspiration, wake up call, challenge, or whatever you might call it came from fellow ham and friend KU4XO.  He finished his assault on 160m in 2016 and is now on the verge of 9 band DXCC.  He did it without a listening array and a transmit antenna for 160m built on a small lot.   It reminded me of a similar assault I made on 80m during the winter of 2013-2014 during which I rocketed my DXCC totals from 20-116 witha somewhat inefficient inverted L.   (It had to be inefficient because my impedance was close to 50 ohms and you had to be at 36 ohms to get to 100% efficiency.  Unfortunately you had to lay down 120 1/4 wave radials to get there.  I only had 1/8 wave radials numbering about 30).   Despite this handicap I succeeded.  I actually plotted the timeline as shown  below: 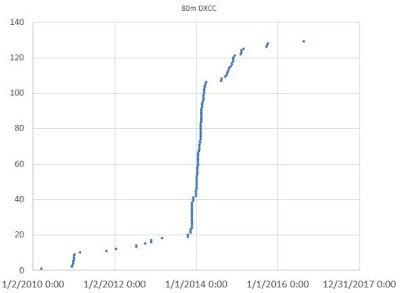 KU4XO had a similar handicap on 160m yet he succeeded - through effort and patience.

During all of 2016 I had not done much in the low bands.  In fact I took down my inverted L as I was concentrating on the DX Marathon Formula 5W and managed a score of 201.  I put up a 30m delta loop instead.   It was a decent effort on the DX Marathon but not good enough to break into the top 5 world wide.

Now it is time to renew the assault on 160m.   I just called the Wireman for 130 feet of 12 gage copper for the folded counterpoise proposed by K2AV and W0UCE.   I also ordered the specially constructed isolation transformer for this counterpoise design from Balun Designs.   I should have this antenna up in the air by this weekend.  Wish me luck.

Just to be clear, I am not starting from scratch (35 confirmed out of 41 worked) and it is kind of getting late in the winter.  Here are tips from KU4XO for posterity:

This was the trifecta for me reverse beacon network for CW, JT65 for digital, DX cluster for voice. Using this method I was able to cover all modes at once.

The very most important point is (I know you probably already know this) there is DX out there on CW that never gets spotted on the DX cluster. This is where the reverse beacon network comes in. If anyone calls CQ the skimmers will pick it up before anyone has a chance to work em. That’s your chance to be the first to work em before the pile builds assuming it’s rare enough for a pile to build.

Things you may not want to do:


Another thing that helped me is having something to do while waiting for the DX to roll in. I listen to talk radio in the shack it helps me stay focused and awake ready to pounce when that new one comes along."

Thank you Matt (KU4XO) for these tips.

Posted by Ariel Jacala at 4:18 PM No comments:

Snow storm in SC and My Hexbeam 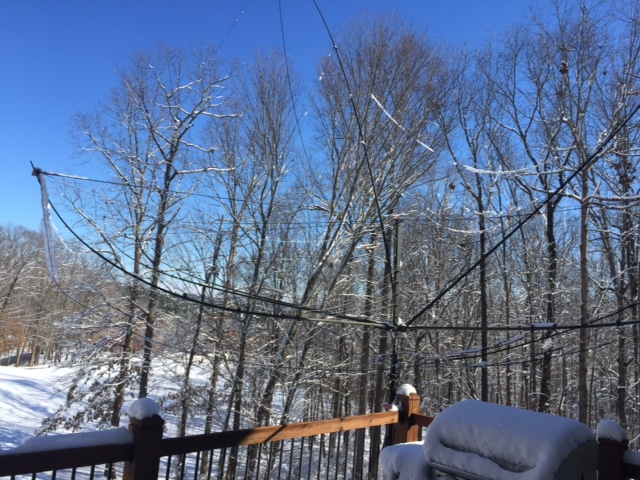 The hexbeam was a mangled mess but none of the spreaders broke.  It is all back to normal now 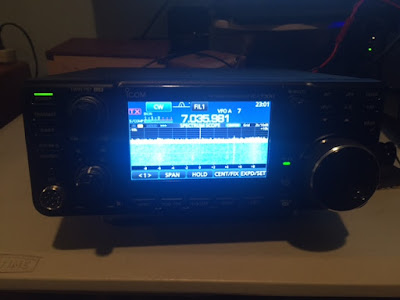 This is one nice rig.  SDR at the price point of a Kenwood TS590.  It has a built in Panadapter - not as nice as the PX3 but quite functional.  It takes getting used to the touch screen controls.  It has a built in tuner.  Size wise it is just as small as a K3 or TS590. Audio sounds good - with the NR - QRN can be tamed.
Posted by Ariel Jacala at 8:21 PM No comments: 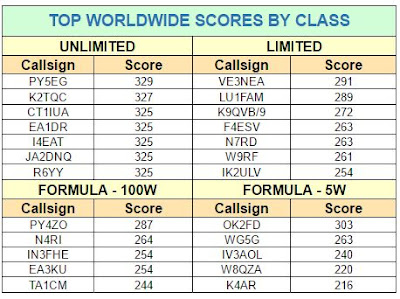 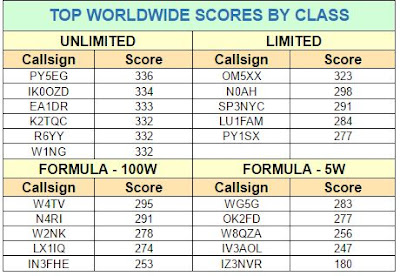 Posted by Ariel Jacala at 4:25 AM No comments:

This is a replica of the WW2 Era parasets constructed by the British and dropped behind enemy lines via parachute - hence the name "Paraset".   Here I am using an OHR Wattmeter to measure output RF.  Watch the YouTube video below for a taste of the receive.  Dave Anderson also constructed one and we will be demoing it at the next Greer Club meeting. 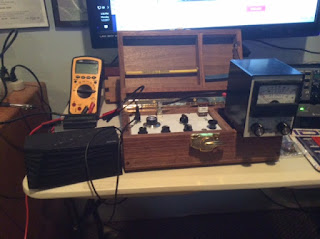 Posted by Ariel Jacala at 2:35 PM No comments: