This leaves the following pending receipt of a card

That leaves me having missed the United Nations expedition 4U70UN while I was away in Turkey.  I am hearing 3B7FA on PSK63 bu I am not set up to transmit on PSK63 - so I will have to miss this one too - too many irons in the fire.  I am happy to get Vietnam and Chad for the time being.

This will make McGyver proud - DXing as TA3/NY4G 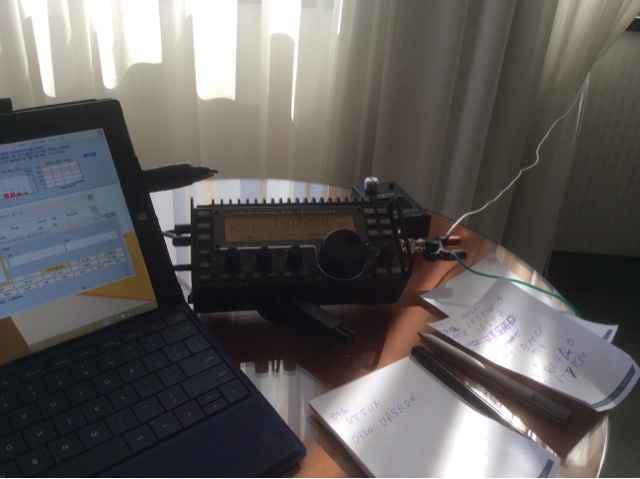 I was told the windows in my 19th floor hotel room did not open so I did not bring a wire antenna.  Lesson learned here is never believe what other people tell you and always have a backup plan.
To a hammer everything looks like a nail.  To a ham anything that has metal in it looks like an antenna.  I repurposed a 25 foot extension cord into an antenna.  I stripped off the outside insulation and pulled out all three wires.  I connected the two of the three wires together into a 41 foot radiator and connected it to the center conductor of a BNC adapter.  I strung the 41 foot radiator out the window.  I then took the green wire, cut it down to about 16 feet and connected it to the shield of the BNC adapter as a counterpoise.  What I have now is an instant random wire that is tunable with the KX3 ATU from 40m to 10m.  It is actually near resonant on 20 and 40m.  I used the door as measuring stick.  I used the door handles for leverage in stripping off the thick insulation.  I used the band aids from my first aid kit as electrical tape to keep the wire joint together after splicing.
I then managed to work several Russians and one Slovenian.
Posted by Ariel Jacala at 2:44 AM No comments:


The following members of the SCDXA are in the log

Bob ND7J did not make it because of his work schedule.  Everybody I know tells me they were easier to work on SSB


UPDATE - Last night we experienced even stronger winds than what is now typical. One op reported his bed was moving during the night from the wind that was lifting his tent. We think he was dreaming as it was really several hundred hermit crabs carrying him to their nesting area.
Last report we have shows: SFI=80, A=56, K=3, the quality of the signals on this end have been marginal. We know that you are hearing us better than we’re hearing you. With the A having been as high as 77 it’s a miracle you hear us at all.
Last night we opened to NA on 40 SSB while competing with an “Over the Horizon Radar” that was about the same signal strength as most NA signals and atmospheric noise. This continued for about 2 – 3 hours before NA started building. Similar situation with EU, weak signals and radar interference. We appreciated Asia standing by during the NA and later EU openings. We had similar weak signal challenges on 30 meter CW, with signals out of EU mostly in the noise. We had good openings on 80 CW. We also had excellent openings on 20 CW to the UK, Nordics, and other northwest EU countries. Until now there’s been very little to no propagation to that region.
The ops are reporting working these long hours under the current conditions is very tiring and not much fun.
Since we’re in Asia’s back yard they have propagation the vast majority of time. They have about 44% of the contacts because we hear them during your propagation lulls, its a simple choice, work Asia or work nothing. While some of you think we’re ignoring NA and EU in favor of AS, the reality is propagation is erratic. Openings are not as obvious to us while we’re working what we can hear. We always call for NA – EU when we hear an opening to those geos.
All equipment and the generators continue to work very well. The Evohe crew has been very helpful with guy inspections and maintenance.
With 2 operating days remaining we’ll continue to look for NA and EU, and ask all geographies to call if only an All Time New One on any band.
Team Chesterfield Island DXpedition


Posted by Ariel Jacala at 3:04 AM No comments:

Trial of the Alex Loop 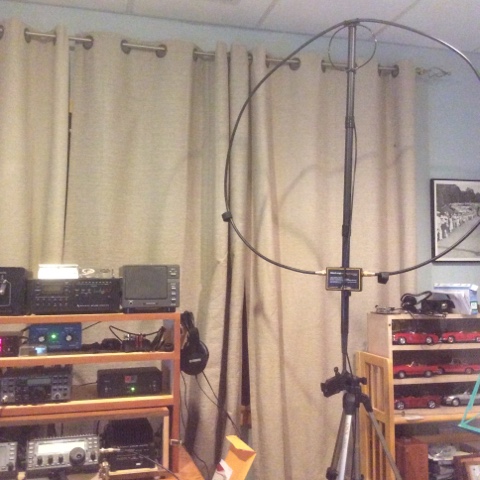 Band conditions were terrible. The  A index was 76 and Kp index was 7.  The only signal I can find was that of N6SL out of Florida.  He still heard me at 5 watts from a distance of 414 miles. Will have to try again when band conditions are better.
Posted by Ariel Jacala at 5:21 PM No comments:

Here is an update from the Chesterfield team courtesy of Bernie W3UR
"The wind continues to blow. If you imagine being in a wind tunnel with a wind speed between 20 - 30 knots, and occasional stronger gusts you'll understand the challenges. Wind and tent noise makes it difficult to hear, even with cans, so we apologize for repeats. Sleeping is difficult because the tents are shaking. The pile-ups are energetic and orderly, THANK YOU. The team continues to be in good spirits and dealing with the situation as you would expect.
Safety is a priority - we're being overly cautious when it comes to taking chances with antennas. Today we installed the 2 SteppIR beams and tried to install the Battle Creek Special but the winds were too strong to complete the installation, The SteppIR are withstanding the wind and working well.

The tents are holding up well, the very deep sand requires us to pay constant attention to all guy wires and ground stakes.Placing 50 pound (22 kg) sand bags at the most critical guy points has helped immensely. Because of the rough seas the skipper will bring supplies to the island 2 times per day until the sea calms down. We are hoping for a break in the weather in 24 hours. Being on a tropical island you may not think about it being cold, but tonight it is cooling down and we're all wearing layers and jackets, however there has been very little rain.

The bands are in good condition, with excellent runs to all geography, we've had excellent openings and hope propagation continues to be favorable.

Team Chesterfield"
Posted by Ariel Jacala at 8:20 PM No comments: