Proceeding from Mt. Hardy on March 13, I arrived at the Grassy Ridge Mine Overlook on the Blue Ridge Parkway.   I read the notes from Dean K2JB and Patrick KI4SVM – with emphasis on keeping an eye on the fence line on the right for navigation for summiting Steestachee Bald W4C/WM-010.   I got on the Mountains to Sea Trail (MST) for about 50 meters and began the bush-whack after I passed the cut-up dead fall which crossed the trail.  I saw the fence line that Dean mentioned and kept it within eyesight as I trudged on up the steep summit.   There was no definable ridge so this fence line was important to keep an eye on.   I dodged many fallen trees on the way up.  Being leafless, the hardwood thicket was easy enough to bust through.   Only 750 meters or so to the summit and before long I was there.  I found a small clearing at the summit to set up my radio station.   The climate was pretty temperate and comfortable and I settled into my sweep of the bands from 20m to 30m, then 40m and 60m and generated a lot of QSOs.  I did get a summit-to-summit call with AC1Z who was on W1/HA-010 which was a nice bonus.   Time to head back down the hill and go on to Waterrock Knob.   I took a track favoring ease of footing and lost track of the fence line.  I did not realize that I was veering away from the fence line track.   I should have generated more way points on the way up.   I only had two way points – one half way and one back at the car.    I tried to navigate to the most recent way point and realized that it was to the left of me and almost behind me.   I knew I had to scoot sideways to recover to the fence line.   My footing was either soft or hard depending on whether I was stepping on rocks or fallen leaves.   I kept on sliding over to the left as I carefully and slowly made my way down.   Soon I found out that I had to climb out of the hole I was in back to car for about 200 meters to the left.   I never did see the fence line and just saw my truck above me about 50 meters away.  It was a relief to hear the sound of cars passing on the Blue Ridge Parkway and seeing my truck again. 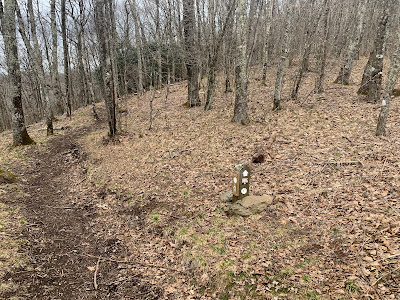 The start of the hike on the MST.  There i a cut up log about 50 meters away where the bushwhack starts 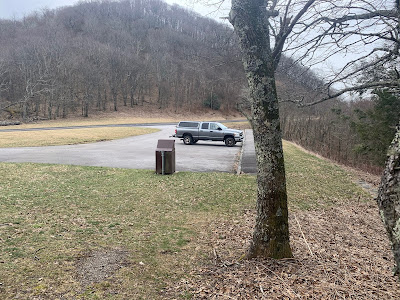 A look back to the truck as I got started 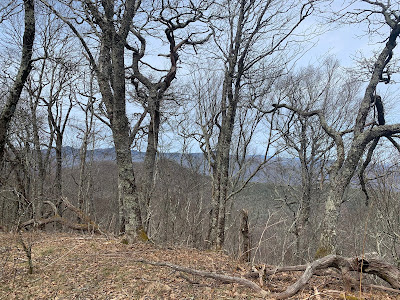 Summit is heavily forested but there is a good cell signal 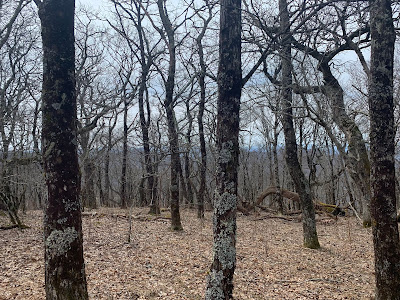 The summit is not that big 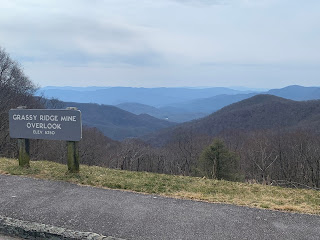 The overlook where the truck was parked 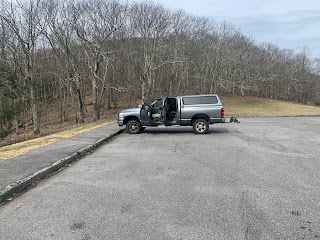 Getting ready to go to Waterrock Knob


I got in the car and noticed the soreness of my quads from the effort of the bush-whack.  I proceeded on to Waterrock Knob W4C/WM-004, another 10 pointer.   This was a civilized hike with a partially paved walk up of 800 meters or so and 138 meters of vertical.   It was short but steep with large rocks as stepping stones.  With my sore quads, I slowly made my way up the trail.   Soon I was on a familiar summit.  Scott KW4JM and I had been here the year before and this was one of my first few summits.   I recognized the trees and the bench that had been there previously.   Set-up now is second nature and I was on the air in just a few minutes, swept the bands as usual.   No summit-to-summit QSO’s while on the summit this time.   After the sweep of the bands, it was time to head back down and savor the day.   It was still a pretty good day with 2 out of 3 summits successfully activated.   I was both tired and hungry. 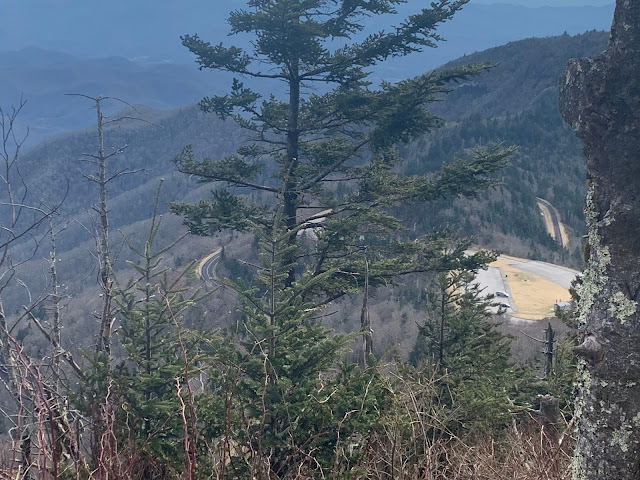 View of the parking lot from the summit 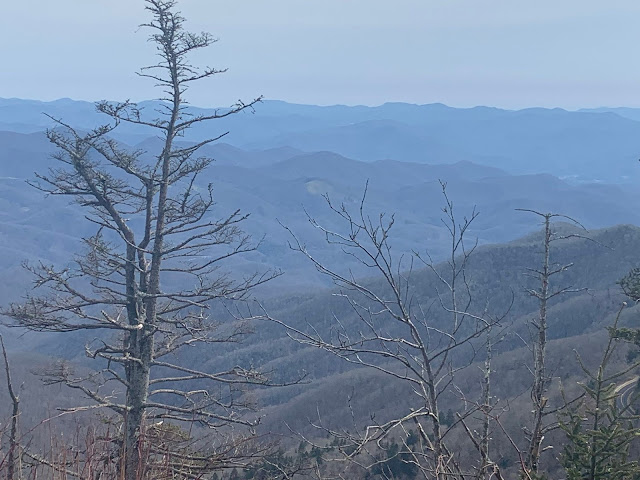 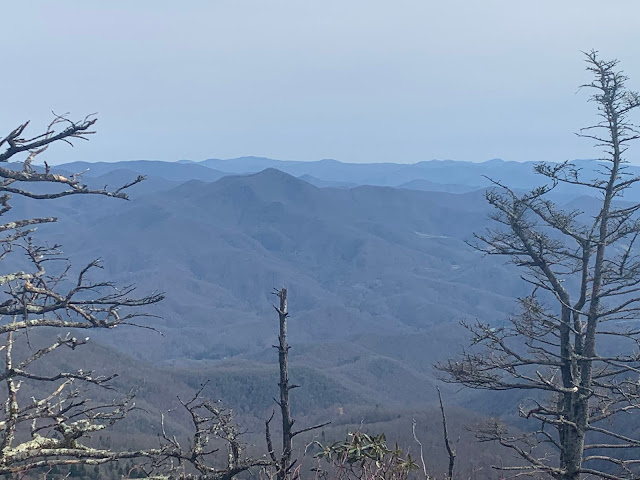 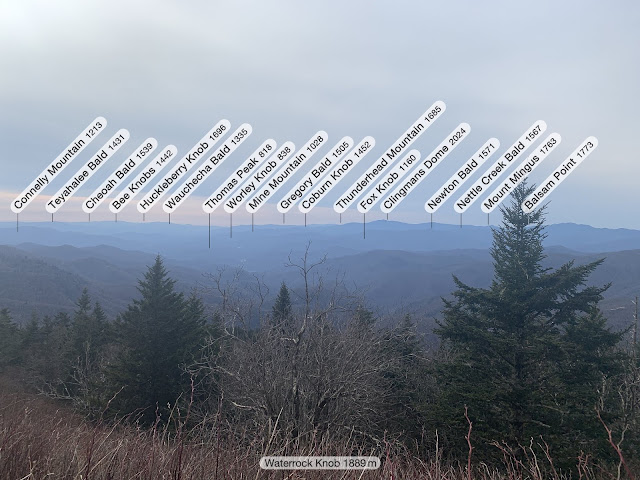 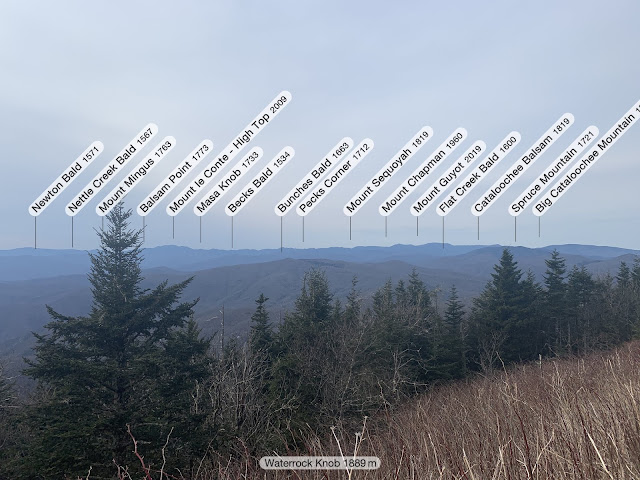 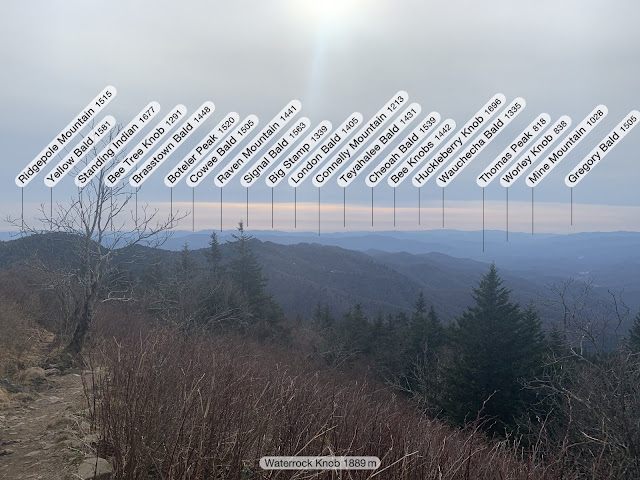